I (Chris Uhlik) have always been infatuated with motorcycles. I started riding a Puch Maxi 50cc moped, with pedals, at age 16 (early 1978 IIRC) in Irvine California. My motorcycle riding took a pause when I moved to Japan in 1990, and I hardly rode between then and late 2002 when I was working at Google and communting 50 miles to Mountain View from Danville. I bought a 1991 BMW K100RS and started riding again.

Then in 2004 Google was going public and I was feeling spendy. Well, for me spendy. I wiled away many hours on eBay and craigslist looking at my dream bikes. The VTX1800, the VFR800, the BMW R1100RT, ... The first one to appear was a 1 year old Honda VTX1800R for $7,600 which I won on eBay from a guy in Hood River Oregon. I flew North and rode the motorcycle back to California. Now I had 2 motorcycles and could invite my father or brother to ride with me. The ride back from Oregon, even though it was down Interstate 5, whetted my appetite for long distance touring in the mountains.

Now I had 2 motorcycles and could only ride one at a time. I started working on my brother Matt Zerega (the Z in FUZ-moto) trying to get him to do a tour with me. I was dreaming about South America, Chile, Patagonia, etc. But I realized I lived in Northern California where people come from around the world to do motorcycle tours on some of the best motorcycling roads in the world. Instead of dropping $10k on an exotic tour, why not spend $200 for gas and lodging and just head out into the Sierras or Coastal Range?

Then my father in law suddenly died December 2004 followed by my father suddenly dying a few weeks later in January 2005. I was 45 years old and having a bit of a mid-life crisis. At least I was starting to feel mortal. I realized that my father had lots of things he wanted to do, but just didn't. He died before he got the chance.

The Bucket List movie wasn't out yet (released Dec 2007), but I was making a list of things I was going to do in my life. Things my father didn't do. I wasn't going to let life pass me by. 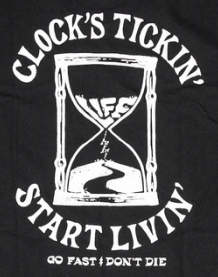 March 12, 2005. We were at a family reunion at my mother's place in Shell Beach California. I was taking a walk with my uncles and talking about my father's recent death and my disappointment with not getting to do more things with him, like riding motorcycles. I knew Jerry had owned a Honda Goldwing when he lived in Florida. Maybe he'd be interested in riding with us. Out walking with my uncles, I asked Jerry if he would come on a motorcycle tour with me and Matt. Uncle Richie piped in with, "I'm totally up for a motorcycle tour!" Suddenly we had 4 people (Chris, Matt, Richie, Jerry) and I had only 3 motorcycles.

Back to craigslist and ebay and I found that BMWR1100RT I was dreaming about. But then my brother Joe heard about all the fun and wanted to join us. So Matt, jealous of all the new motorcycles, and a craigslist shopper to beat them all, found a Yamaha Warrior. We had 5 bikes between us and the first Faubert, Uhlik, Zerega-motorcycle tour FUZ-moto was on.

More details on all of the motorcycles I've owned.

Long ago Kathi and I rode on my motorcycle quite a bit. She tried out sitting on various bikes herself at the time but they were always too tall. She sat on a new VTR250 at a dealer, and noticed her feet could be closer to flat on the ground, but somehow we never bought her one. And then kids came along.
I spent 2020 on many week+ long rides and mentioned my interest in continuing to spend more of my time on the road. Our youngest turned 18, leaving for college in the fall, and in December 2020, when bemoaning the lack of bikes for shorter riders, Kathi heard about the Honda Grom and became more interested in considering riding a motorcycle. On Christmas Eve, we drove up to Seattle attempting to buy her a Grom as a beginner's bike, but that fell through and on Dec 30, we bought a Benelli TNT 135 instead. And in early January, Kathi took the WMST motorcycle permit training class from SW Motorcycle Safety at the Clark County Fairgrounds for her permit.
After researching good beginner bikes in the 400cc range for seat height, visiting dealers and sitting on them, on May 17, we bought her a brand new Kawasaki Ninja 400 ABS. On May 28, she took her final tests and got her motorcycle license endorsement on her Ninja. A few days later, Kathi said "Hey, why don't I have a flag for the PNW-GT? I want to ride too!" OMG, I can hardly think of anything that makes me happier! So I'm rider 120 and she's rider 357 and we are off on the PNW-GT together. If FUZ-moto is Faubert's, Uhlik's and Zerega, then BUCK-moto is Baganoff-Uhlik-Chris-and-Kathi riding together. Here's a list of some of our more significant rides.